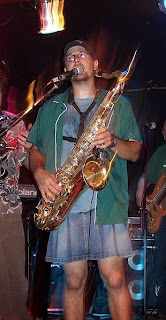 It seems bizarre that people are still hung up about seeing a man in a skirt. Women have been wearing trousers since 1850 (earlier in the case of female miners), so why has it taken so long for men's fashion to be rationalised in the same way? There was a brief bout of skirt-wearing in the nineties, but it seems to have subsided.

Men can wear sarongs on the beach, kilts and priestly garb (and there are plenty of pictures of Jesus in a dress), but people are still intolerant of men wearing actual skirts. Why? It's only a piece of cloth. It must be because the Western definition of masculinity is still so circumscribed by convention that people can't imagine a man being a man unless he's hairy and/or betrousered. There's still a strong taboo against men crying, for instance.
Men who wear skirts: I salute you from the bottom of my heart. You are pioneers as much as the early feminists in their bloomers.

We detachments steady throwing,
Down the edges, through the passes, up the mountains steep,
Conquering, holding, daring, venturing as we go the unknown ways,
Pioneers! O pioneers!

Here's some sites about men in skirts:
Posted by Yewtree at 03:11