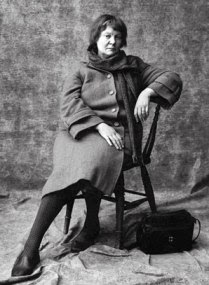 Iris Murdoch... brilliant writer of scintillating prose, philosopher, fearless sexual adventurer, communist, and sharp observer of the human condition. Definitely qualifies as a top-notch bluestocking. Three cheers for Iris!
Her later novels went off the boil a bit, but the glittering and claustrophobic atmosphere of The Bell (about a small quirky spiritual community and its internal tensions) assures its place as a classic. Her writing style was similar to that of A S Byatt (another great bluestocking). I can honestly say that Iris Murdoch taught me to look at the world in a different way.
She read classics, ancient history, and philosophy at Somerville College, Oxford, and philosophy as a postgraduate at Newnham College, Cambridge, where she attended a number of Ludwig Wittgenstein's lectures. In 1948, she became a fellow of St Anne's College, Oxford.
There are even videos of her on YouTube. Whatever next? It's almost as though intellectuals were becoming popular and mainstream!
Posted by Yewtree at 21:28