Some second-wave feminists insist that there is something essentially female about women; that men are the oppressors; and that the patriarchy is everywhere, insidiously sending its messages of subjugation wherever you are, like a giant phallic panopticon.

I remember in the late 1980s going to join the lesbian society at university, and when I asked why they didn't have a joint society with the gay men, the response was, "They may be gay, but they're still men." (So yeah, obviously part of the patriarchal conspiracy, just by virtue of having tackle. Right.) (Most universities now have a joint LGBT society.) As you can imagine, this was one of the formative experiences that made me a third-wave feminist.

Many second-wave feminists propagate the myth of an ancient matriarchal or matrifocal society. Now, don't get me wrong, I do think this is a rather lovely idea (at least a matrifocal society would be - I'm not sure that matriarchy would be any better than patriarchy), but I doubt that it was ever actually a reality. Though it must be said that there are societies which retain traces of matrifocality, for example those cultures that count descent through the female line, like the Jews do.

What we do know is that from about 500 BCE onwards, there was suddenly a reaction against sex, and particularly sex with women. Celibacy and male friendship were in, and women were out. This phase was particularly virulent until about 500 CE, when it began to abate. Unfortunately, the middle and latter part of this period coincided with the rise of Christianity, which is why that religion was so anti-women. Some of the writings of the Church in this period are eye-wateringly misogynist. Of course, this general negativity towards sex and the body must also have adversely affected men. 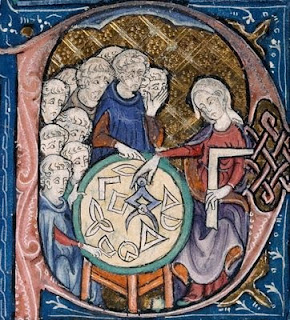 In this 14th century illustration from a copy of Euclid's Elements, a woman is shown holding a compass and square, teaching geometry to a group of monks.

In fact, the fortunes of women have fluctuated quite dramatically during the last 2000 years. During the 14th century, women could own property and businesses (which is why we have surnames like Brewster, a female brewer, and Webster, a female weaver, because surnames were formalised in the 14th century). Women could also learn Latin, and obviously therefore many were also literate. Nunneries were not just places of seclusion, but communities of learned women. Things weren't 100% rosy for medieval women, but they were definitely looking up. But then the Reformation created problems for women, because the Virgin Mary and female saints could no longer be venerated, and the Divine was seen as exclusively male. Suddenly, women were very much back to being second-class citizens again.

The view of women as utterly crushed by patriarchy denies agency to women, portraying us as passive victims. Our ancestors were just as capable of feminism as you or I. Take Christine de Pizan, for instance, Europe's first professional female writer, who wrote The Book of the City of Ladies, an important feminist work of the early 15th century:

By 1405, Christine de Pizan had completed her most successful literary works, The Book of the City of Ladies and The Treasure of the City of Ladies, or The Book of the Three Virtues. The first of these shows the importance of women’s past contributions to society, and the second strives to teach women of all estates how to cultivate useful qualities in order to counteract the growth of misogyny ... Christine’s final work was a poem eulogizing Joan of Arc, the peasant girl who took a very public role in organizing French military resistance to English domination in the early fifteenth century. Written in 1429, The Tale of Joan of Arc celebrates the appearance of a woman military leader who, according to Christine, vindicated and rewarded all women’s efforts to defend their own sex (Wikipedia)

Life was hard in the medieval period for everyone; I would rather have been an upper-class medieval woman than a male serf, thank you very much. There were still misogynists around, but some women did have and wield power.

In the seventeenth century, a small army of women marched on Parliament to demand the vote. In the eighteenth century, women again had some economic power and a measure of sexual and intellectual freedom. Things took a down-turn again in the nineteenth century with the construction of middle-class womanhood (the "angel of the house") and the pathologisation of women's sexuality. But then along came first-wave feminism (at last) to campaign for legal rights and suffrage.

Furthermore, focussing on how women are oppressed under the current system obscures the complex hierarchies of race, class, and sexuality. It also obscures the ways in which men are constrained and bounded by gender stereotyping.

First let's look at how race, class and gender intersect. In the typical hierarchical view (circa 1930), a straight white upper-class man would be top of the heap. Just below him would be the straight white upper-class woman and the straight white upper-class gay or lesbian. Just below them would be the white middle classes, followed by well-to-do Asian and Black people (though perhaps the white working classes, being quite racist, would have regarded themselves as above any non-white person). So it would simply not be true to say that men were always regarded as superior to women — it depended on their race and class. Of course, all this is deeply uncomfortable to contemplate — it's not pleasant trying to get inside the mind of a sexist or a racist or a homophobe or a snob.

Second, let's look at how "patriarchal" attitudes affect men. Men are not supposed to dress in certain ways (no skirts, dresses, frills, make-up, nail-varnish, or anything remotely "feminine" — even moisturiser is viewed with suspicion); they are not supposed to show much emotion, and especially aren't allowed to cry. They are not supposed to be interested in "feminine" pursuits - botany, needlework, jewellery-making — even religion and spirituality are seen as a bit "feminine". Men must be taller than their girlfriends; they must not have girls' names (ever noticed how any boy's name that gets given to girls suddenly ceases to be regarded as a boy's name?) Masculinity is hedged about with so many taboos and prohibitions, it's no wonder that men are confused and insecure about it.

If we want to liberate women from the "patriarchy", therefore, we also need to liberate men from it. Otherwise, how can it be completely dismantled?
Posted by Yewtree at 01:08